History of the event

In the summer of 1994, Ivan and Vivian Hicks came to Perth/Andover to play old tyme fiddle tunes. I drove all the way from Nictau to the concert, because I have always loved old tyme fiddle music, and the concert was fantastic. I had bought a tape and stayed after the concert to get it autographed. Ivan asked me my name for the autograph, and I told him, he then asked what I did for a living, and I told him I make wooden canoes. He finished signing the tape and handed it back then said that neither he nor Vivian had ever been in a canoe before. So I offered to take them down the river providing he brought his fiddle along. He smiled and twinkled his eye and said that sounds like a great idea. Just then Vivian came over and he introduced me and told her of my offer. Helen Edgar also came by just then, Ivan and Vivian were staying with the Edgar’s that night, and Helen agreed that it would be a great idea and they would like to come too. 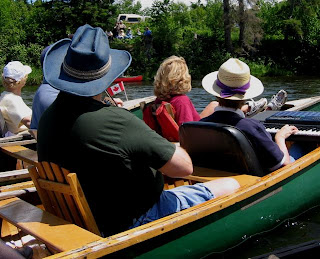 The next morning the weather was perfect for a sail down the Tobique. My next door neighbors Nita Black and Joe Yacovino brought their Miller canoe, and Doug and Helen Edgar had theirs, so I brought my kayak and video camera and videoed the entire river trip. Ivan's lone fiddle rang out so clear, the beauty of the river, the great music made for a very special day. Sometimes I was a hundred yards ahead videoing and the microphone picked up every note! We spent over 4 hours on the river and as we sailed into Riley Brook Ivan broke out into Amazing Grace. Later as we had supper we watched the trip on the video. It was all the proof we needed that we had found a really unique way to enjoy the Tobique, fiddle tunes and canoeing all at once. We made a date to come back and do this again.

The following year we added two more instruments. Garold Hanscom a well-known fiddle player played Guitar, and Vivian played a keyboard. The weather cooperated very nicely, and it was even a more memorial event and another wonderful day was spent on the river.

The next winter one cold January day Ivan phoned me and asked if he were to bring 50 fiddle players to Nictau, would I be able to find enough canoes to float the group down the river? This was to celebrate Ivan’s 50th anniversary of playing the fiddle! Within a week I had the canoes all lined up and phoned him back and we set a date in late June. A float was put together for square dancers, and the afternoon was so fantastic all the fiddlers said we are all coming back NEXT year and telling their friends, and they did, and year after year it has grown in size and popularity. Helen Edgar started the Fiddles on the Tobique annual fiddle camp, first with twelve students, one was from China and two were from Egypt! Now the fiddle camp has over 80 students and is well recognized as one of the finest fiddle camps to be found anywhere. 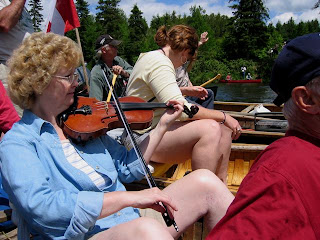 More events were also planned as the popularity grew. Now there are fiddle workshops, jam sessions, a lovely concert, a pancake breakfast, the famous river run, a dance, BBQ's, and on Sunday morning a lovely church service. It is a three-day affair and people from England, France, Germany, Holland, Scotland, Switzerland, Egypt, New Zealand, Australia, South Africa, The Philippines, Japan, and the USA nave gathered on the Tobique for this truly international event.

CBC has been on the Tobique several times with On the road again, Land and Sea, and The National. A film company from Toronto has been here for a half hour “made for TV” program, a film company from France also filmed a documentary on Canadian old tyme fiddle music which included Fiddles on the Tobique, and most recently Mozus Productions did a one hour “made for TV” documentary on the Maritime Violin of Jasper Wood and filmed in HD which included the Fiddles on the Tobique.

Fiddles on the Tobique is a unique festival which celebrates the beauty and history of a lovely river, THE TOBIQUE, the music of old tyme fiddling tradition, and enjoying one of Canada’s 7 wonders, the Canoe. There is no registration, no fee to come down the river, if you would like to become a "Friend of Fiddles on the Tobique, and make a contribution to help in the cost and expenses, such donations would be very much appreciated. 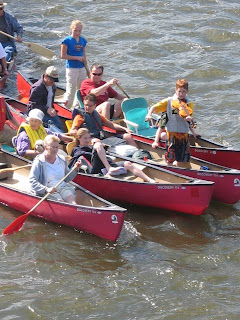